The show was first organised as a one day gymkhana in 1979 with the primary aim of raising money for St.Nicholas CE Primary School. The aims remain largely unchanged 35 years later but the event has expanded into its present two day format with dozens of Country Fayre attractions including non-competitive horse and pony ones. The beneficiaries of the show have been extended to cover other charities and organisations in the village and local area.

Many thousands of pounds have been raised to date. This money has contributed towards various improvements to the village school, improvements to the Village Halls, equipment for the Pre-School, Scouts and Guides, along with funding for outings by the Over-60's and the Young Farmers.

The event is planned by a Committee of volunteers and draws heavily on the time and resources of the St. Nicholas PTA and many other organisations in the Village. 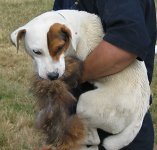